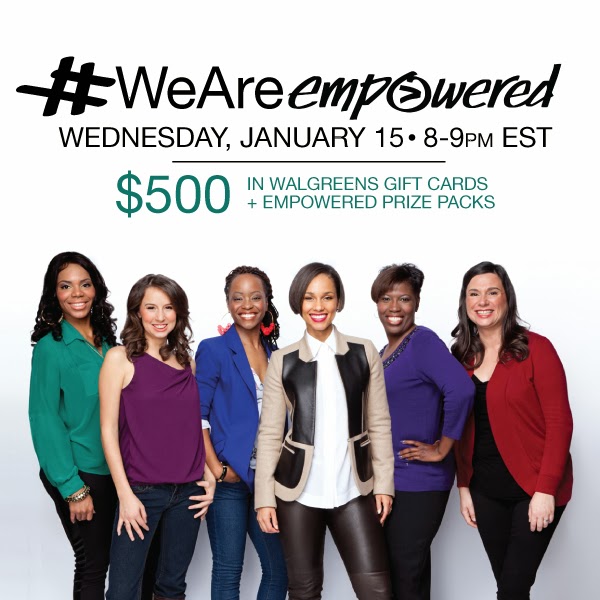 There are currently 1.1 million people in the United States living with HIV/AIDS. 1 in 4 of those living with HIV/AIDS are women. Women of color are at even greater risk, accounting for the majority of new infections among women. Here is another startling fact, 1 in 5 American with HIV do not know that they are positive.

Walgreens has teamed up with Greater Than AIDS for a national watch party on, Sunday January 19, 2014, during which the documentary We Are Empowered will be watched and discussed. Join us Wednesday, January 15, 2014 for the #WeAreEmpowered Twitter Party. We will discuss the upcoming documentary being aired on VH1, and ways that you can stay safe and empower yourself.

While in college in the 90s, I was a part of Binghamton University’s SafeHighs.  We were a group of students who would meet in dorms and small gatherings to talk and discuss ways to stay safe and HIV/AIDS awareness.  So many were unaware of how to protect themselves and I was happy to be a part of a group who helped to empower others.

RSVP today and learn how you can enter to win our special Early Bird gift card prize!

The latest giveaways, reviews, tips and much more

Six Amazing Things That Are New at Walt Disney World

The Call of the Wild In Theaters Now #Giveaway

Keep the Journey Going with Always Eat After 7 PM

Be Safe, Be Kind & Listen

Brighter Days Ahead for Families $315 in Prizes #Giveaway

New Year Giveaway for Women with $420 in Prizes #Giveaway

I truly do miss going to a concert. The experience

#ad This year is all about taking care of your hea

#ad As summer comes to a close, my family and I to

#ad I must say that I am somewhat jealous of this

​ ​#ad I have found one silver lining during t

#ad Back to school might be different but I’m go

Calling all #brunch fans! How about Tropical Berry